“Crossing the BLVD by Warren Lehrer, Judith Sloan and Scott Johnson is a rich, varied listening experience, a demonstration of the way you can explore the world without leaving home. BLVD emphasises the rhythmic musicality of everyday speech… you hear laughter, sorrow and many moving tales of hardship, flight, splintered families and the difficulties of assimilation… Dynamic pieces from spoken-word recordings – the vocal samples leap out of the speakers… The editing and juxtaposition of voices can be subtle, allowing straight testimony to come through, or extravagantly artful, complex, and exhilarating… The [companion] book is a turbo-driven eye-witness guide with riveting first-person testimonies.”
The Guardian John L Walters

Featured as a “Global Hit”
“An incredible and moving story… Sloan and Lehrer spent three years talking to immigrants and refugees in Queens, traveling the world, in a sense, while never leaving their backyard… a place where new immigrants from every corner of the globe come to start their lives in America. The result is a unique multi-media project. Oral History with a twist!” The World, PRI/BBCMarco Werman

“…Besides crafting a book, the authors have collaborated with composer Scott Johnson to produce a CD that jangles interviewees’ speech with music often played or sung by the immigrants themselves. The result is a bricolage of foreign accents, world melodies and flinty comment. It all sounds and reads like echoing subway stations and big newsstands where you don’t know all the languages but wish you did. Crossing the BLVD lets you listen and browse and understand.”
City Limits Debbie Nathan

“The immigrant experience in New York is one of the most important stories in the city right now, and Lehrer and Sloan have made it their beat. What’s amazing about them is they’ve been working with these people a long time. It’s not that they spend a few hours with these immigrants eliciting quotes. It’s clear that they know them as people, as complex individuals. That’s the way it should be done.”
Dean Olsher, Executive Producer, PRI’s The Next Big Thing

“Yo Miss! Teaching Inside the Cultural Divide,” which [Sloan] performs with musical collaborators, re-enacts and riffs on her experiences teaching teenagers from myriad worlds: refugee camps, struggling neighborhoods, prisons. It is a performance about performances, a story containing many stories.”
The New York Times
Anne Barnard

“The Search For IT and Other Pronouns is an aesthetic colossus, straddling theater, music, social satire and design… a carefully constructed study in counterpoint, filled with lots of surprises… The CD booklet is a work of art…” David Garland, New York Public Radio

“The Search For IT and Other Pronouns is a brilliant, fantastic work. Absolutely riveting!”
Charles Amirkhanian, KPFA, Pacifica Radio

“…Lehrer also co-composed, with Harvey Goldman, the song cycle The Search For IT and Other Pronouns, a full-length compact disc that has the most intelligently and imaginatively designed accompanying booklet to come my way, reminding us that the secondary elements of any artifact deserve as much attention as the primary ones…”
Dictionary of the Avant-Gardes,
Richard Kostelanetz 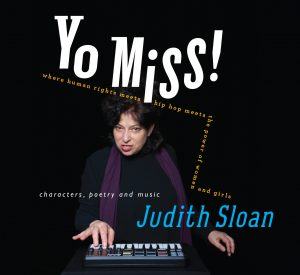 And through ITUNES, download or physical CD BUY NOW ITUNES

Crossing The BLVD: strangers, neighbors, aliens in a new America 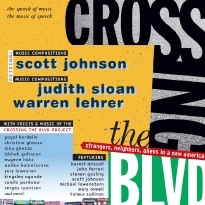 Original new music compositions by Scott Johnson (of John-Somebody fame) and text-based audio compositions by Judith Sloan and Warren Lehrer cross the boundaries between music and speech, journalism and expressionism, tradition and the avant-garde. All sampled voices are culled from interviews of “new immigrants” by Lehrer/Sloan on their three-year journey through the borough of Queens — the most ethnically diverse locality in the United States. Produced by Judith Sloan, the CD also includes music by Crossing the BLVD participants including the gypsy-punk-cabaret band Gogol Bordello, Nigerian gospel singer Kingsley Ogunde, and Romanian-American musicians Christine and Dinu Ghezzo. This CD is a rich and original musical soundscape that reflects the immigrant experience at the crossroads of a paradoxical and ever-changing America. Aired on National Public Radio stations nationwide.

EarSay Radio Documentaries have aired on public radio stations nationwide, including Crossing the BLVD radio documentaries: Labib’s Café, about an Egyptian café that was attacked after 9/11; Tongues Twisting produced by Judith Sloan for The Third Coast International Audio Festival (also aired on NPR’s All Things Considered). Clapping games and tongue twisters in multiple languages help unravel life stories when Judith Sloan records young immigrants in a theatre workshop. Among other things, the kids reveal the game of adapting to life in America. A Tattle Tale: Eyewitness in Mississippi: A radio docudrama based on a play conceived and written by Warren Lehrer and Judith Sloan. Performed by Judith Sloan. Documentary produced by Laura Sydell and Judith Sloan. Music by John Zorn. The story of a teenage runaway, turned deputy sheriff, turned whistleblower, bears witness to coming of age in the face of hypocrisy and lawlessness. Inspired by the true story of Andrea Gibbs, who in 1989, sworn to uphold the law, blew the whistle on her superior officers for the brutal treatment of juvenile offenders in detention centers and prisons in Mississippi. Radio Documentary Produced for Horizons, National Public Radio, 1997. 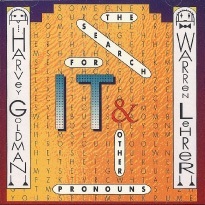 This full-length audio CD is a musical setting of attitudes and longings for voices and instruments. Nine pieces explore the search for the big ITs —power (Tag Yer IT), search for an AIDS cure (It Just Might Work), love (Hymnfor Her), victory (I for an I), god (You and Me), material wealth (You Got Nothin), the ineffable (Something or Other); and other pronouns — (They, He is a She Dog). A collaboration with Warren Lehrer and Harvey Goldman, this post-minimalist opera, has received some good airplay on new music radio programs throughout the country. Composed with the aid of midi-synthesis, the recording features Goldman and Lehrer on digital and acoustic instruments and voice, as well asbaritone Alan Seale, sopranos Patricia Ruiz, Nina Heller and Angela DeCicco, extended vocals by Stacy Schuman, Judith Sloan and Brother Blue. Includes 12 page booklet with complete lyrics.

The Search For IT and Other Pronouns Audio CD
Written and composed by Harvey Goldman and Warren Lehrer La La Music. 1992