Queens in Manhattan, Crossing the BLVD & It Can Happen Here – One Night Only 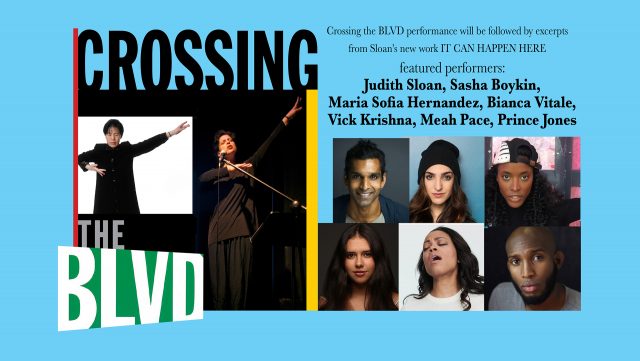 New York Institute of Technology, School of Interdisciplinary Studies & Education
presents a multimedia theatrical performance of Crossing the BLVD  followed by short excerpts from Sloan’s new work IT CAN HAPPEN HERE. Judith Sloan and guest actors in an evening of stories about migration, refuge and finding home.

“…a whirlwind tour and love poem of what has often been called the most racially and ethnically diverse county in America. The New York Times

“Immigrant life as told in the intimate, rich, comic, ironic and sad stories so often seen but not heard in America’s big cities.” The Washington Post

As immigration policy is hotly debated around the country, Crossing the BLVD: strangers, neighbors, aliens in a new America presents the human stories of why immigrants and refugees have migrated to the US and what their experiences have been since they came here pre- and post-9/11.