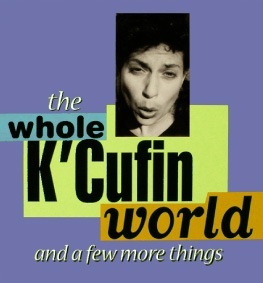 In an evening with Judith Sloan, anything can happen. Frustrated with not being able to say the F word on the radio while writing commentaries about Pat Buchanan, Sloan came up with an alternative word that would be FCC safe: K’Cufin, and embarked on a series of weekly radio commentaries with Warren Lehrer after Malachy Macourt asked Sloan to replace him on WBAI’s Talkback in 1994. Judith—who combines “fine acting that gives her performance depth and texture” (Variety), with “exquisite comic timing” (Indianapolis Star), “wickedly skewers stereotypes” (The Village Voice)—transforms into a myriad of characters in a full-length comic performance filled with laughter and tears. Judith’s character-driven monologues reveal the hypocrisy that lies beneath our information-glutted lives. Working in the comedic tradition of Lily Tomlin and Whoopi Goldberg, her characters challenge common assumptions about war and peace, women, generational struggle, gay and heterosexual relationships, and the ties that bind friends and family. Her monologues in this show are peppered with up-to-the-minute commentary on world affairs.