Funded with help from a New York State Council on the Arts Sponsored Project grant with the Visual Studies Workshop.

“Lehrer’s i mean you know is a verbal exploration as well as a conceptual space for performance… While the movement through the book is linear and progressive, the movement through a page is polyvalent and spatial, rather than unidirectional—so that meaning moves forward and outward like soundwaves in a musical piece. The ‘polysemiotic’ narrative offers the reader numerous possible readings by the nature of its internal formal presentations, as well as thematic interweaving of themes, characters, and points of view…”
The Century of Artists’ BooksJohanna Drucker, Granary Books

“Suppose an artist investigated the universe of expressive means and decided to use the repetition and organization of sound that musical form offers, then scripted the drama and presence of human players, and presented these graphically in a book. What would that work be like? In creating the bookworks i mean you know and French Fries [with Dennis Bernstein], Warren Lehrer does just this. He borrows powerful devices from music and drama that are usually experienced in real time and uses them in books, where the reader determines the pace and can even change the order of events.
In the opening pages of i mean you know, Lehrer describes how this works: “i mean you know is intended to function in two ways. The first is as a book read alone cuddled up in bed or on the train, a book that reads silently outloud from within an imagined buildingscape of sound. i mean you know is a play of voices. It is the music of thought. A day at work. A few hours of one day within the minds of seven people. The characters inhabit one building but the architecture is of the mind and not at all concrete…”

…Remember your grade school teacher’s admonition, “don’t mouth your words when you read”? Moving one’s lips while reading or allowing the words to sound in one’s mind slow down the reading by making the reader too aware of the process. Yet, i mean you know was designed as a book that reads silently outloud. This sounding creates a consciousness of the act of “reading” that is both disturbing and interesting. The reader remains conscious of the physical and visual presence of the book as well as how it sounds… Through the form of both books, Lehrer explores the rich dissonance of sound and life surrounding each of us. At the same time, they show the separateness of each human existence. Each character is manifested as a separate flow of ideas and experiences, which interact only partially with those of other characters… These bookworks challenge readers to explore the act of reading. Though books are usually read in a linear manner, we are invited to alter that pattern: we can change the pace, we can look back, we can skip ahead… Because Lehrer borrows devices from music and drama, reading i mean you know is in some ways like attending a musical or dramatic performance of works that explore the line between life and art…
Afterimage Nancy Soloman

“…i mean you know functions both as a book to be approached interactively by the reader, and as a script or score to be used for a performance. The setting of the book is a building with translucent walls that form visible but illusive barriers between the seven characters. This enables the reader to eavesdrop on everyone at the same time… The fictional characters are “typecast” into typefaces, typographic arrangements, and colors reflective of their personalities. Each voice is seen just as it might be heard in the course of normal conversation, for the properties of the text determine the form. Spatial intervals between letters, words, and lines are adjusted to the natural cadence of speech, and the repetition of words and phrases intensify the reader’s perceptions of each character. Conversations, often occurring simultaneously, angle their way into the page, turn, shift, overlap, and angle off again… Translating the spoken word into the visual word is not new. It is rooted in several historical experiments, and Lehrer has ingeniously extended earlier efforts by exploring the most subtle nuances of the genre. His influences are broadbased and include among others the illuminated manuscripts of the Middle Ages and the lyricism of ancient Greek poetry. While reading Lehrer’s books, one might think of Robert Massin’s interpretation of Ionesco’s The Bald Soprano, musical writings of Gertrude Stein; or the typographic performances of John Cage…” American Typography Today, Rob Carter

“i mean you know is an extraordinary book!
John Cage, composer/author 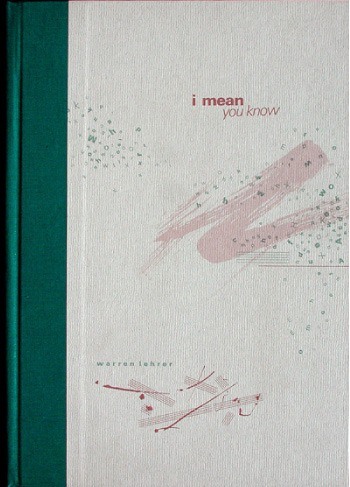 i mean you know is a book to be read quietly alone. It also functions as a score for a performance. The book/ play takes place within a few hours of one day inside the minds of seven characters who co-inhabit the same building. This musical/ theatrical setting juxtaposes interior narratives of disparate characters into various arrangements: solo, duo, trio, quartet, sextet, and septet. The characters are: Sasha, the artist; Violone who is confined to a wheelchair and speaks through her violin; Myron, the mystic guilt-ridden millionaire; Ace Monroe, a British-born radio talk show host; Little Tracy, the toddler; Angelica, an African-American house painter and mother; and Trombonio who speaks only through his trombone. This book, published in 1984, further developed Lehrer’s approach to using typography as a means of creating psycho/acoustic translations of speech and thought on the printed page. While portraying stories and characters, this book/performance score celebrates those synaptic gaps and utterances between thoughts and speech that bridge our sometimes imperfect search for meaning (i mean) and a desire to connect with others (you know).

i mean you know- Hardcover with dustjacket 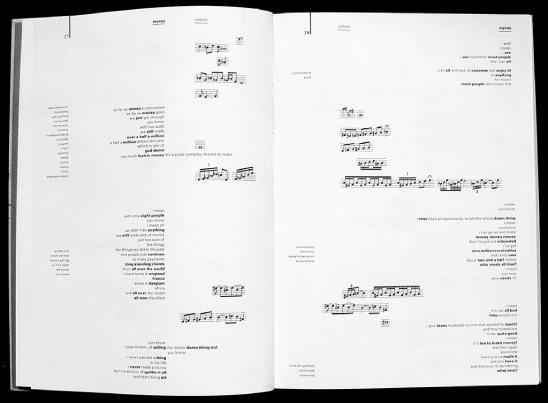 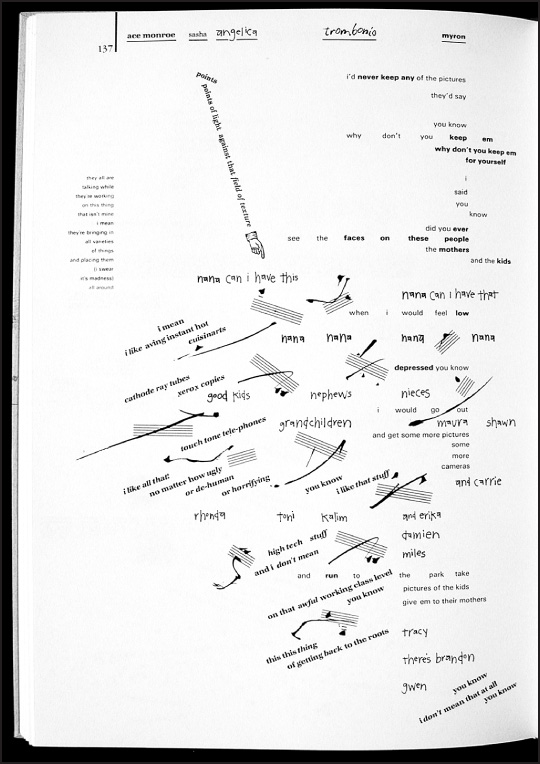 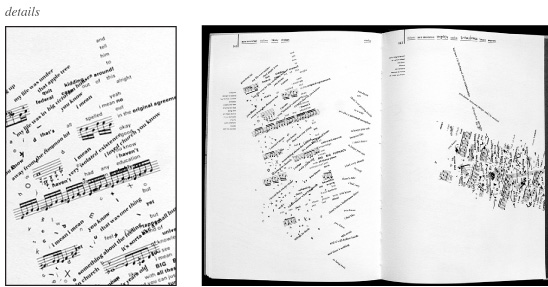