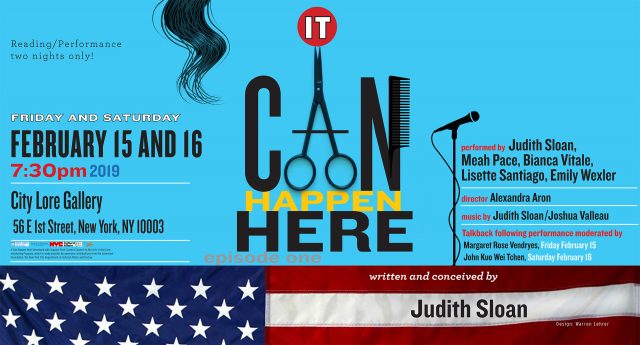 Performances will be followed by a talkback.

Friday February 15th Moderated by Margaret Rose Vendryes, Chair of the Department of Performing and Fine Arts and Director of the Fine Arts Gallery at York College, Queens, New York.

In “It Can Happen Here,” two hairdressers-one black, one white-in an ever-changing neighborhood in Queens, embark on a new dream from their two-chair hair salon. They follow their passion for singing and nurturing a community in the midst of a national political climate of chaos, division and autocracy. These two women from different generations have lived next door to each other for 34 years and have worked together for over a decade. They confront the repressive political climate and gentrification with idiosyncrasies and humor, until one of their clients, facing a deportation crisis, presents them with a moral dilemma.

Written by Judith Sloan, winner of the Brendan Gill Prize. “It Can Happen Here,” references the Sinclair Lewis novel, It Can’t Happen Here, which chronicled the fictitious election of a power-hungry politician who stirred up fear by promising a return to patriotism.  For nine months, Sloan, award-winning performer, and radio producer (Crossing the BLVD, 1001 Voices: Symphony for a New America), talked with residents of Queens –  the most diverse locality in the U.S.  – about their hopes, fears, and aspirations. “Like the novel, It Can’t Happen Here, my play is inspired by real events,” says Sloan. “It Can Happen Here” was commissioned by the Queens Council on the Arts’ inaugural Artist Commissioning Program (ACP), which provides local choreographers, playwrights and composers with funding towards the creation and production of original work. Selected for her project’s capacity to tell untold stories in American art, Sloan was one of four artists chosen for the 2017-2018 inaugural award.

Sloan’s signature song from “It Can Happen Here” was a semi-finalist in songwriting for the 2018 Song of the Year competition.